Back in August 2016, the members of NEOLUG joined forces to create a 5-foot tall Minecraft Creeper. For those unfamiliar with this block-shaped monstrosity, a “Creeper” is an exploding creature from the video game Minecraft.  (It’s one of the most dangerous enemies in the game) 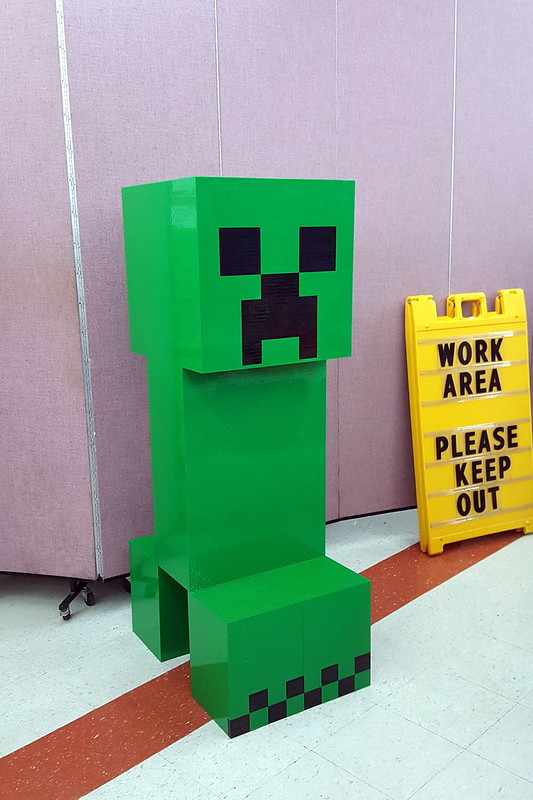 Our LEGO® Creeper is made from more than 10,000 green 2×4 LEGO® bricks as well as a handful of green plates and black bricks.

NEOLUG member Adrian Drake acted as the lead designer for this collaborative group build. Armed with only the total number of green bricks that the club possessed, Adrian determined the maximum size that our creeper could be. Then, he set the group to work building green boxes of various dimensions. The head, for example, is 64 studs wide by 53 bricks tall.

In total, there are four boxes that serve as the Creeper’s feet (with pixelated toes), and a large torso and head. From start to finish (including the time it took Adrian to “crunch the numbers”) we were able to completely build and assemble our LEGO® Creeper in just under 2 hours.

NEOLUG’s life-sized Creeper was featured in Brick Journal and is currently on display for a limited time only at Sir Troy’s Toy Kingdom in Canton, Ohio. To see more photos of NEOLUG’s Minecraft Creeper, including photos of the building process and assembly, check out NEOLUG’s Flickr page.